The Holiday Season is full of traveling with families separated for work, school, or away protecting our country. During the year thankfully there is technology that can give the illusion of togetherness. But Christmas is when families all try to come together and for many families that means traveling.

Traveling whether it be abroad or just stateside means contact with the public which in general usually is fine but it is important to be safe while traveling, a trip can go from tiresome to scary in mere moments,

Former CIA Agent and Marine Drew Dwyer had some advice to share with the public to help keep us safe during this holiday season.

While Traveling Dwyer suggests people bring the 3 things that are practical, two of which can be brought in your carry-on. A First Aid Kit, A Flashlight, and a pocket knife. “People don’t think about it. But in a situation with no ambient light, you can shine a flashlight in the eyes of an attacker, or use it to find the exits wherever you are.”

Flying can be a hassle with the worry that your luggage may not be treated all that gently or worse may somehow end up missing. Dwyer advises that you go online and buy some “Fragile Tickets” to ensure better treatment of your belongings.  “They look just like the ones the airlines use. What that ensures is that nothing will be put on top of your bag. It will be the last to go on the plane and the first to come out on the conveyor belt.”

Lost luggage is the other problem the former agent provides a solution for. He suggests the use of RF Transmitters. They can be easily found online and once you connect them to your phone you will have instant luggage tracking. 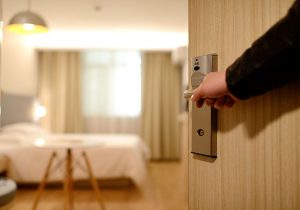 Once you arrive at your hotel usually you pick a room based either on price, accommodations needed, or if you are lucky the view. There are other things to keep in mind if you are traveling abroad. Dwyer advises the second or third floor. “The ground floor is readily accessible to intruders and the top floor does not allow any room to maneuver. The first or second (European) floors allow access for most third world country emergency vehicles.”

Some people may want to add an extra layer of security when they get their room and in this case, an easy fix is put forward: a rubber doorstop. The rubber door stop can be wedged in the door on your side helping to slow an unwanted entry. Key cards can be hacked and stolen so it adds an extra layer of security that will bring you peace of mind. May even give you an extra second to stop the cleaning lady from checking on you despite your “Do Not Disturb Sign.”

Outside of finding out where the ice machine is or the pool, travel goers should also be aware of what the fire escape routes are. If you don’t trust your memory with the cellphone age practically everyone has a camera on hand and ready to in this case take a picture of the fire escape path that could be handy for later.

Some Basic Travel Tips Below.

When traveling abroad many people may be marking their maps with tourist locations or their final destinations but a few other locations should be mapped out as well. “Let’s say things do go wrong and you think you’re being followed, though. There are a few things that you can do. Dwyer said: “I have a small GPS called a Gecko. Anytime I travel, whether in or out of the country, I mark my hotel and any other place of significance. When I’m overseas, it’s where the embassy is.”

God forbid you end up lost in a city and find yourself at the wrong end of a crazed person with a weapon. If you do end up getting robbed Dwyer advises you do more than simply hand over your wallet/ belongings. “You throw it on the ground away from them, which will change the person’s line of sight. You have a chance to escape and run past them, and it creates a distraction. If you hand it to them, you give them more of an opportunity to grab you.”

Situational Awareness is a big factor that people need to consider when traveling it can be as easy as looking for safer alternatives or just being aware of your surroundings. For example, if you are stuck with the choice between hitting a jaywalking pedestrian or driving up on a grassy median, you should be prepared for the jostling grassy median.

The last piece of advice that Dwyer has to offer needs to be heeded especially with the recent acts of violence that have been sprouting up. Dwyer strongly urges people to try their best not to freeze up in the event of an emergency. This may be hard as some people get too scared. If a shooting or incident occurs he strongly warns people to be ready to get behind some kind of barricade. Find cover as sometimes that is all that is needed to survive a violent incident.

Hopefully, these suggestions can help you in your travels. Merry Christmas an Be Safe out there.