A tenured professor felt the gross need to celebrate the death of Barbara Bush. In fact, when she heard of the death she went to twitter to express her hate.

“Barbara Bush was generous and smart and amazing who, along with her husband, raised a war criminal. Fuck outta here with your nice words.” 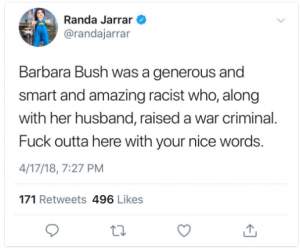 She, of course, received plenty of criticism and comments in return. But she was not deterred as she claimed that she could never get fired and would always have people to spread her hate. 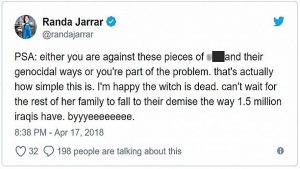 “I work as a tenured professor. I make 100K a year doing that. I will never be fired. I will always have people wanting to hear what I have to say,” she wrote on Twitter.

But her job has had to deal with her hatred as social media spread the fact that she worked at Fresno State.

This is Randa Jarrar. She’s a professor at Fresno State. Yesterday she celebrated the death of Barbara Bush.

Fresno University posted a response to her tasteless behavior. They apologized on her behalf and clarified that her personal views that she shares in her personal account in no way reflect the Schools view.

“On behalf of Fresno State, I extend my deepest condolences to the Bush Family on the loss of our former First Lady, Barbara Bush. We share the deep concerns expressed by others over the personal comments made today by Professor Randa Jarrar…”

Her tweets have of course been taken down now as she likely was asked to by her job. You know the one that she claims she could never lose. Although this is free speech it is by far a gross use of it. What’s worse is that she is a teacher and likely spreading this hate to her students.

Ben Shapiro responded to her tweet in his usual straightforward way.

“Good news: you won’t have to see her when she’s in heaven and you’re burning in hell.”