Mother of the year: This poor excuse for a parent forced her infant to smoke weed?!

Brianna Ashanti Lofton of Raleigh, North Carolina, posted an enraging video of her and her infant ‘sharing’ a blunt. To be fair, the Mainstream media is reporting that the substance in the blunt has not been confirmed by police to be marijuana but since the mother was found in possession of weed, and we aren’t gullible, it’s pretty safe to assume she likely gave her infant the drug.

Thankfully, members on Facebook contacted police after the video went viral and reported the mother. Including people who knew Brianna personally. The little girl was removed from the home and Brianna was arrested immediately.

According to Fox News police in North Carolina said Wednesday that they arrested a 20-year-old who they identified as the mother of a baby who reportedly appeared to be smoking in a video shared on Facebook.

Brianna Ashanti Lofton was arrested by the Raleigh Police Department and charged with two counts of felony child abuse, contributing to delinquency and possession of marijuana, authorities said in a statement.

Raleigh Police Department officers have arrested Brianna Ashanti Lofton (DOB 10/20/97), the mother of the baby seen smoking in a video posted on Facebook. She was charged with two counts of Felony Child Abuse, Contributing to Delinquency, and Possession of Marijuana, and transported to the Wake County Detention Center. The baby has been placed with Wake County Child Protective Services.

Raleigh residents and others began posting the video and comments on the Department’s Facebook page just after 9:30 a.m. today. “We appreciate the public’s help in this matter,” said RPD Lieutenant Jason Hodge. “We welcome and encourage any assistance the public is willing to give us at all times.” 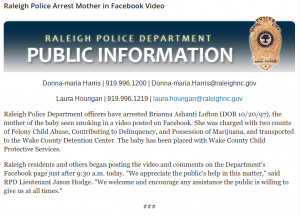 We feel this mother’s actions go well beyond ‘poor judgment’ and no amount of time should award her custody again. Tell us what you think in the comments below.