Hollywood is full of Trump hating actors and actresses. It is no surprise that celebrities would come out against The White House, but Jim Carrey has taken an interesting route. The famed actor known for his ridiculous antics in movies like Dumb and Dumber, and Ace Ventura Pet Detective, has hit a new low with his attack on Trump.

This is the portrait of a so-called Christian whose only purpose in life is to lie for the wicked. Monstrous! pic.twitter.com/MeYLTy1pqb

The 56-year-old comedian seems to have lost touch with reality and his sense of humor has clearly warped.

And finally, his Wizard of Oz take on Trump.

If you liked my last cartoon you may also enjoy…

"THE WICKED WITCH OF THE WEST WING AND PUTIN’S FLYING MONKEYS“ pic.twitter.com/slBG7j1s8d

Or you can watch the Quick Sum Up Below.

But he didn’t stop there. He felt the need to take things to a perverse level and tweeted this nasty piece below. 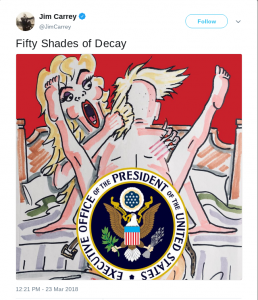 He clearly has lost it and this artwork shows he probably needs to seek help. These are all paintings. So this is what washed up actors do when they get bored. Listen to Liberal Propaganda and make disturbing art.

“As I said in my previous article about this, I feel slightly bad pointing out that Carrey is going out like this (or at least seems likely to go out like this; without the intervention of a very skilled team of clinicians and/or Haldol, I don’t necessarily see his career prospects improving any).

However, the sad thing is that people actually seem to be embracing this stuff. As of Sunday morning, the semi-pornographic depiction of Trump was approaching 100,000 likes and had over 27,000 retweets. That’s something you really want to see showing up in your Twitter feed. The flying monkeys one did even better.

The moral of the story is that the internet will embrace your insanity just so long as it’s anti-Trump, albeit with no concern for your mental well-being. See also: LaBeouf, Shia.”