Racist Professor Gets ‘Just Deserts’ As He Is Forced To Resign.

University’s across the country are being plagued by these so-called educators that are teaching for the sole purpose of spreading their hateful ideologies. Well, that’s what it seems like anyway with the stories that keep appearing in the news and online. At Drexel University George Ciccariello-Maher a political and global studies professor has decided to resign due to threats and feeling too unsafe to teach at the campus.

If you asked him why he is quitting he would claim that he is a victim of the alt-right and white nationalists. But if you were to look past the liberal veil of the mainstream media you would find that he shouldn’t be teaching. Professor Maher was not just controversial as he claims he is outright racist. He tweeted the following concerning his resignation.

After December 31st, 2017, I will no longer work at Drexel University. pic.twitter.com/bAM37dbv1q

As you can see in his tweet he believes he is under attack and that teachers need to unify with him in the name of free speech. So what was this controversial statement that he feels he is unjustly getting attacked for? He posted two controversial tweets the first one last Christmas: 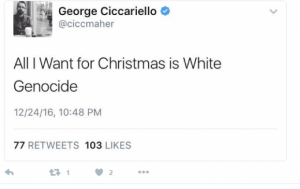 He claims that the tweet was done satirically in reference to how things got better for Haitians after the white massacre. But his hate runs deep as he could not contain his white hate during the Vegas shooting where he once again tweeted anti-white sentiment.

“White people and men are told that they are entitled to everything. This is what happens when they don’t get what they want. The narrative of white victimization has been gradually built over the past 40 years. It is the spinal column of Trumpism, and most extreme form is the white genocide myth. Yesterday was a morbid symptom of what happens when those who believe they deserve to own the world also think it is being stolen from them.”

“Here’s a wild idea: white supremacy in the U.S. is a bipartisan project, & *both* the gun lobby *and* the anti-gun lobby are racist as f—.”

He, of course, was reprimanded by the University and he can’t figure out why people threatened him as they did after his first tweet. Professor Maher had to teach from home via webcam as the campus was now deemed unsafe for him. CNN is covering him right now letting him play the victim card in all its glory. But is it really surprising that he is receiving threats when the ‘educator’ is just constantly spouting white hate? Would the same be said for a white professor who constantly spoke out against other races? Is it somehow more PC to bash white people as opposed to other races?

The ‘educator’ is thankfully resigning and if white hate is not enough he also bashes US Troops, earlier this year he tweeted the following:

Some guy gave up his first class seat for a uniformed soldier. People are thanking him. I'm trying not to vomit or yell about Mosul.

Watch The Tucker Carlson Interview Below That Showcases The Racist Professor.

The professor hides his hate behind free speech but luckily the public saw through his B.S. He is now being pushed to leave his position at the College which they must be relieved about. This is a reprehensible human being, who attacks soldiers for the wars they fight in. Despite being a professor, he is an uneducated racist that should never have had the opportunity to spread his corrupt ideologies to any student.