They say lady justice is blind but sometimes I wish she would peek out from behind the blindfold, especially in the case of pedophiles. Democrat Senate Candidate Krysten Sinema fought to keep a loophole open for pedophiles. You would think a female would try and stop perverse men from preying on children but she was actually arguing for them. She claimed that some 12 and 13-year-olds look older than her. But she was not done there as she said that some of these minors were also more sophisticated and developed than her.

“As a former social worker at an elementary school, there were children at my school, 12, 13-year-old, and some of these children look older than me. They were much more, I mean, definitely sophisticated, developed.”

“If I had seen a number of my former students at a place outside a classroom, I would not have known that those children were 12 instead of 19 or 20,” she said. 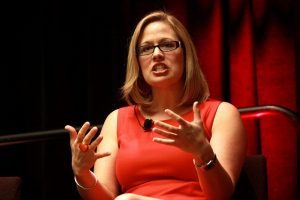 She doesn’t seem to look underdeveloped or particularly young. So I don’t see how she would think the way she does.

Her campaign claims that she has done a lot of good work when it comes to children and child trafficking. Yet she was advocating for offenders that supposedly can’t tell the difference betwee a 12 year old and a legal adult. She  was not saying 17 year olds but young teens to preteens. This is ridiculous. People should be able to tell whether it be by conversation or just appearance.

I hope this is not a new Democrat movement to encourage and defend pedophiles. This is just despicable behavior.