Many Dems complain about the border. They don’t understand that obvious need to vet the incoming migrants. They feel justified with all of their complaints because there are families being split up temporarily. But the Border Patrol Agents are not only doing it for our safety, they are doing it for the innocent children that are getting sucked up in schemes to help economic seeking migrants get in our country.

The U.S. Customs and Border Protection posted the following photo on Instagram, showing a young child that was used as a visa by a migrant that has already been kicked out twice. 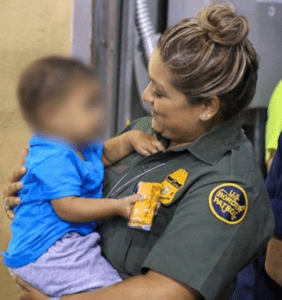 “A Border Patrol agent holds a migrant child at the Central Processing Facility in Donna, TX.
Behind the photo: On July 17, McAllen USBP agents encountered a group of 12 people comprised of family units and unaccompanied children who turned themselves in.
Record checks revealed an individual traveling with his alleged son had 2 previous immigration arrests in El Paso Sector just in the past month. Given the recent apprehensions and the age of the child, Agents requested the assistance of HSI to administer a rapid DNA test.
The test revealed there is no parent-child relationship. The man admitted he was not the child’s father, but knew the mother and had permission to the take the child. The man admitted that it is common knowledge in Honduras that if you bring a child, you will be released.”

This is what the Border Patrol is dealing with, Fake Families, made for the sole purpose of getting across the border. The migrant knew he couldn’t get across on his own so he borrowed a child as a ticket in.

Dems go on about how they are supposedly worried about the families that are temporarily separated but this why. We have children being used by non-relatives to get across the border. This is what should be harped on, instead of the pointless complaints from Dems that refuse to do anything about the border.