Press Secretary, Sarah Sanders, commended Sen. Lindsey Graham for having more decent and courage than every Democrat member of the committee,” her spot-on assessment struck a nerve with one big-shot lawyer. He chose to reply to her comment on Twitter and would soon regret his irritation and emotional response.

Sanders stated during Brett Kavanaugh’s hearing: [Sen. Lindsey Graham, SC] has more decency and courage than every Democrat member of the committee combined. God bless him.”

.@LindseyGrahamSC has more decency and courage than every Democrat member of the committee combined. God bless him.

In a now-deleted tweet, Aquila wrote: “@PressSec I never knew you had a sense of humor OMG!!!! How funny!!!! Rot in Hell You B!tch” 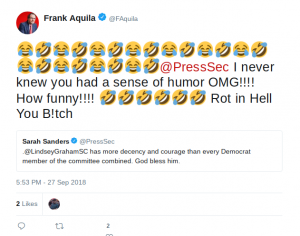 The vile response came from Frank Aquila, who is a partner at Sullivan & Cromwell LLP, one of America’s largest law firms. Aquila obvious recognized his mistake but he didn’t just delete the comment – he deleted his whole account. A move that I wish more Democrats would make.

Aquila did absolutely nothing but prove Sander’s point with his disgusting tweet and childish behavior that followed. What’s more ridiculous is that Aquila portrays himself as a feminist. The Daily Wire shared several of his ‘pro-fem’ tweets from the deleted account.

As Reported By Time:

Republican Senator Lindsey Graham lambasted Democrats during his questioning of Supreme Court nominee Brett Kavanaugh on Thursday afternoon, criticizing their handling of the sexual assault allegations against the nominee.

“This is the most unethical sham since I’ve been in politics,” Graham said of the hearing.

Graham attacked Democrats for the time they took to bring Christine Blasey Ford’s allegations to the Senate’s attention, and criticized Democratic senators’ calls for an FBI investigation into the allegations of sexual assault against Kavanaugh. Democrats, led by the committee’s ranking member Sen. Dianne Feinstein, explained they were following Ford’s request to keep her name confidential.

Ford initially shared her story with her Congresswoman, Democratic Rep. Anna Eshoo, in early July and then Eshoo’s office sent a letter to Feinstein.