Lion Air flight JT 610 was carrying 189 passengers when it took off and then crashed into the sea 13 minutes later. The flight was from Jakarta to Pangkal Pinang, but the pilot tried to call it off quickly and asked to turn the plane around. The Boeing-737 MAX was in the process of returning to Jakarta when the plane disappeared over the Java Sea. According to the flight data, the plane accelerated and then lost altitude quickly.

So far rescuers have only been able to recover 6 bodies, they fear the rest are lost.

“My prediction is that nobody survived because the victims that we found, their bodies were no longer intact and it’s been hours so it is likely 189 people have died,” search and rescue agency operational director Bambang Suryo Aji told reporters.”

The plane was relatively new as it had only been purchased back in August. But it had recently been having issues.

“Lion Air chief executive Edward Sirait said there was a “technical problem” with the plane on an earlier flight,  which had been fixed, according to Sky News.

“It got repaired in Denpasar [in Bali] and then it was flown to Jakarta,” he said. “Engineers in Jakarta received notes and did another repair before it took off on Monday. That’s the normal procedure for any plane.”

It was an experienced crew and a short flight. 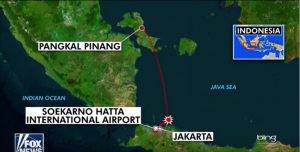 “The captain of the plane, Bhavye Suneja, an Indian national, had more than 6,000 flight hours, and his copilot, named Harvino, had logged more than 5,000, according to a statement posted by Lion Air.

Speaking to reporters at the carrier’s headquarters in Jakarta, Sirait said the plane was “airworthy” and that the pilot had carried out all preflight inspections according to procedure. He added that the pilots had passed mandatory drug screening.”

It is still uncertain as to what caused the crash. To make matters worse the emergency locator transmitter is not transmitting.

Watch The Clip Below.

“In the wake of the crash, Australia has advised its government officials and contractors not to fly Lion Air, a government official told CNN.
Lion Air was added to the European Union’s blacklist of banned carriers in July 2007, and removed from the list in June 2016, according to the Aviation Safety Network.
The low-cost carrier was one of dozens of Indonesian airlines banned from EU airspace in recent years amid safety concerns.”
Airplane crashindonesia