The Social Media King Facebook has deemed “illegal migrant/alien” to be hate speech when it comes to alleged cop killer Gustavo Perez Arriaga. Facebook has taken down many posts where people were differentiating between illegals and vetted immigrants. Apparently calling out an illegal cop killer is hateful.

Arriaga is an illegal immigrant, has self-promoted his status as a member of the Sureno street gang, and has two prior drunk driving convictions in Madera County, Sheriff Christianson said.”

“This suspect, unlike Ron – who immigrated to this country lawfully and legally to pursue his lifelong career of public safety, public service and being a police officer – this suspect is in our country illegally. He doesn’t belong here. He’s a criminal,” Stanislaus County Sheriff Adam Christianson said during a press conference on Thursday afternoon.

One of the posts taken down from Facebook featured below. 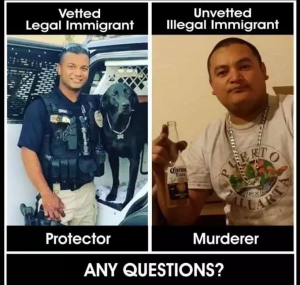 “Illegal alien” is the official term used by the U.S. government since the Reagan administration to describe people who are in the country illegally.” So it’s weird that it would suddenly be an issue.

This sentiment is nothing new as Facebook and many news organizations stopped airing a Trump ad back in November. They claimed that the ad was hateful.

CNN refused to run this ad… I guess they only run fake news and won’t talk about real threats that don’t suit their agenda. Enjoy. Remember this on Tuesday. #vote #voterepublican pic.twitter.com/VyMm7GhPLX

The ad above is not about migrants trying to enter our country legally. The video is meant to show what our border security is up against and what one man did after entering our country illegally.  That’s the whole point of why we vet incoming immigrants. But instead of seeing it for what it is people were offended by it. Most likely those on the left. They don’t seem to want to face the reality of the world.

The Trump ad and the Facebook posts are both seen as offensive by the Left but it just goes to show you how disconnected they are. Facebook was out of line for removing that post. Some people are apparently afraid of facts.