Whatever happened to respecting your elders? A 71-year-old Boston woman, identified as Linda, was looking to sit down on The Redline Train. She attempted to be civil numerous times asking 23-year-old Jada Campbell to move her belongings from a seat next to her. But Campbell acted like she owned the train and would not move her stuff.

“It had been a long week. I said ‘excuse me’ three times, then I got into her face and asked her to move her bag and she said ‘No, I don’t want anyone sitting next to me,’” 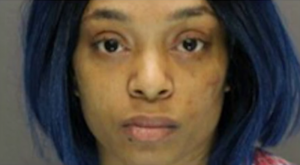 “She was abusive, ranting and raving ‘I’m going to take you down and have it out,’” Linda said.  Linda got off early at Harvard Square, but the rant didn’t stop as she says Campbell followed. Two other passengers tried to step in before it caught the attention of MBTA Transit Police.

“I had two good Samaritans come off with me and they were protective. She came up and said ‘let’s have it out here and now,’ took off her earrings and threw stuff down,” Linda said.

According to police, Campbell resisted arrest and told witnesses who reported the crime, “If I see you on the streets, I’ll murder you.”

“We were all shaking afterward she was such a force,” said Linda.

Campbell was charged with assault, witness intimidation, and disorderly conduct.

They should ban Campbell from the train. There is no reason for her to be ugly about having to move her purse. Linda claimed it was the only seat left on the train so she had no choice. Her behavior is despicable hitting an elderly woman over a seat. Campbell is 23 she should have offered her seat. Thankfully the police arrested her. She needs to be away from the public if she thinks threats of murder are justified over a seat on a train.