The day that Ben Carson was confirmed as the Secretary of Housing and Urban Development (HUD), a federal audit was released which has raised some serious concerns.

The extent of this audit revealed the extent of then President Barak Obama’s plans to reorganize our lives and how he was misusing and redirecting taxpayer money to do it.

According to The Daily Wire,

In one of his first acts as HUD Secretary, Carson ordered an audit of the agency. What he found was staggering: $520 billion in bookkeeping errors.

“The total amounts of errors corrected in HUD’s notes and consolidated financial statements were $516.4 billion and $3.4 billion, respectively,” the auditors wrote.

Take a look at the audit yourself, 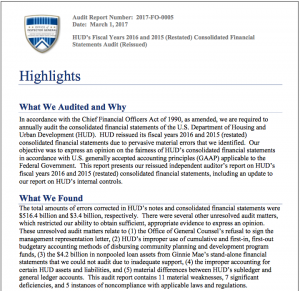 The total amounts of errors corrected in HUD’s notes and consolidated financial statements were $516.4 billion and $3.4 billion, respectively. There were several other unresolved audit matters, which restricted our ability to obtain sufficient, appropriate evidence to express an opinion.

These unresolved audit matters relate to (1) the Office of General Counsel’s refusal to sign the management representation letter, (2) HUD’s improper use of cumulative and first-in, first-out budgetary accounting methods of disbursing community planning and development program funds, (3) the $4.2 billion in nonpooled loan assets from Ginnie Mae’s stand-alone financial statements that we could not audit due to inadequate support, (4) the improper accounting for certain HUD assets and liabilities, and (5) material differences between HUD’s subledger and general ledger accounts. This audit report contains 11 material weaknesses, 7 significant deficiencies, and 5 instances of noncompliance with applicable laws and regulations.

According to the report,

On November 15, 2016, we issued an independent auditor’s report stating that the U.S. Department of Housing and Urban Development (HUD) was unable to provide final fiscal years 2016 and 2015 consolidated financial statements and accompanying notes in a timeframe that would allow us to obtain sufficient, appropriate evidence to determine whether they were free from material misstatement. We also reported on the delays encountered in the material weakness, Weak Internal Controls Over Financial Reporting Led to Errors and Delays in the Preparation of Financial Statements and Notes.

The delays were due to insufficiently designed and implemented financial reporting processes and internal controls that were put into place because of HUD’s transition of its core financial system to a Federal shared service provider (FSSP). HUD inadequately planned and tested the changes to HUD’s financial reporting process before the transition. Additionally, late restatements performed by HUD’s component entities, the Government National Mortgage Association (Ginnie Mae) and Federal Housing Administration (FHA), contributed to the delay in providing final consolidated financial statements. As a result, we were unable to provide an opinion on HUD’s fiscal years 2016 and 2015 financial statements. While there were other material matters that supported our basis for disclaimer, this was the primary reason for our disclaimer of opinion. HUD published its consolidated financial statements and our disclaimer of opinion in HUD’s 2016 agency financial report (AFR).