Just when you thought you heard it all, A Floridian woman, Rhonda Koppenhoefer, 55, found herself on the wrong side of the law, and one crime was not enough for her. The police would never have caught her had the driver not been too distracted to stop at a stop light. 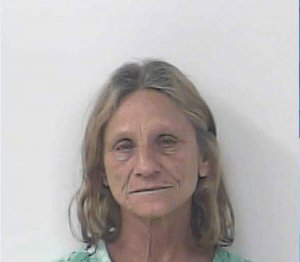 “A Florida woman who was riding shotgun in a pickup truck before a traffic stop was doing more than just drinking beer and smoking crack cocaine, deputies said.”

“According to the arrest report, the officer approached Koppenhoefer in the passenger seat of the car. The officer found a partially empty beer bottle between her legs and a glass pipe on the floor board of the Ford F-150 pickup truck. The officer also found three white rocks on the ground. The rocks field-tested positive for crack cocaine.”

The Driver commented on the incident and why he didn’t immediately pull over.

“He said it took him so long to stop the vehicle and his pants were down because he was receiving sexual acts from Rhonda while he was driving,” the affidavit said

“Koppenhoefer was arrested on charges of cocaine possession, possession of drug equipment and tampering with or destroying physical evidence.”

The Driver simply got off with a citation.

Seems like Koppenhoefer took the brunt of the punishment on this one but maybe she needed it so she could reflect on what she was doing with her life. She definitely needs to find a better male companion.