Charles Schulz the creator of beloved characters like Snoopy and Charlie Brown must be rolling in his grave. People on Social Media are now claiming that the Holiday Special “A Charlie Brown Thanksgiving” is racist. But wait I don’t remember Charlie or Linus throwing out racial slurs at Franklin. Nor do I remember any of the characters treating Franklin poorly. In fact, the only person that was treated poorly was often the main character Charlie as he foolishly trusted Lucy to hold the football for him. But it turns out this whole claim of racism is not over anything the characters said or did. It is over the seating arrangement at the Thanksgiving table. 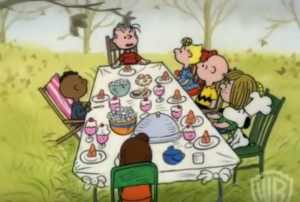 “The scene in question has four characters from Charles M. Schulz’s iconic “Peanuts” cartoon — Sally, Charlie Brown, Peppermint Patty and dog Snoopy — sitting on one side of a makeshift outdoor table for Thanksgiving dinner, with Marcie at one end of the table and Linus at the head.

The cartoon’s lone black character, Franklin, is on his own side of the table seated on a lawn chair. ”

Not watching Charlie Brown Thanksgiving anymore, until they sit some people on the same side of the table as Franklin ✊?✊?

Let’s talk about Franklin. Dude gets invited to Charlie Brown’s by Peppermint Patty. Then he finds out that it wasn’t a real invite, a dog is cooking the food and he’s gotta sit by himself at dinner. That’s Get Out. #CharlieBrownThanksgiving

It seems some people on social media are fishing for racism. This 1972 classic was ahead of its time. In another Charlie Brown episode, Franklin was sitting with everyone. So it could just be a case of there only being so much room on a particular side of a frame.

“During the farewell dinner about one hour and five minutes into 1972’s Snoopy Come Home, Franklin was seated on the same side of the table as Charlie Brown, Lucy, and Frieda — in a regular chair.”

Watch The Clip Below.

“Peanuts” at that point, of course, was already one of the preeminent comic strips in the world, followed and beloved by tens of millions of readers. “He was the voice in the comics at that time,” Glickman emphasizes. United wasn’t about to lose Schulz over this.”

Schulz faced some scrutiny over his decision to include Franklin from the south but Schulz would not be intimidated.

“Schulz received some messages from the South from [editors], saying: ‘Please don’t send us any more strips with black children in the classroom with white children. We’re going through forced integration in our schools and don’t want to see any more of these strips,’ ” Glickman recounts.

Schulz was famous, of course, for doubling-down if you told him that something “couldn’t” be done. (Several years earlier, he’d included Bible passages in TV’s “A Charlie Brown Christmas” after being challenged on Linus’s monologue from the Book of Luke.) So naturally, Franklin was now a fixture.”

But people on social media don’t realize this. They don’t understand that during that time having a black cartoon character was a big deal. They seem to think things have always been the way they are now. Schulz was not being racist in any way. These critics would likely do well to read a book.