Not even legally allowed to drive yet, Giovanni Bromante, 14, from New York has a bright future ahead of him. He’s already started to collect recognition in the racing community and it isn’t hard to see why they’re now calling this young man a prodigy.

According to Giovanni’s site, when most kids were learning to read, Bromante was a racing champion. At the ages of 6, 7 and 8, he won major karting titles across his home state of New York plus international events. Eventually, he moved up to more competitive series and events, winning races and championships in those.

In his very first attempt, Giovanni captured the 2016 Young Lions championship in the Bojangle’s Summer Shootout at Charlotte Motor Speedway, the most competitive and prestigious Legend car title in the world.

Since then the young man’s career has continued to grow, giving him the title ‘NASCAR prodigy’. Giovanni remains humble saying ‘you have to respect the veterans’.

As Reported By CBS New York:

At just 14 years old, he’s a surprising sight to the middle-aged men who see him get out of his race car.

“I hop out of the car and they think ‘Is that kid driving that car?,’” Bromante told CBS2’s Steve Overmyer. “They just don’t want me up there cause I’m 14 years old, and I shouldn’t be up there, but I am… somehow.” 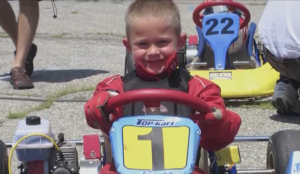 Photo captured from the video.

His family owns a 1965 Impala SS with a McBetts Racing Engine producing 700 horsepower, a perfect car for a racing champion, even if it’s driven by Gionvanni’s mother, Stacey.

“It was a very scary decision,” she said about letting her son race. “I had a child that didn’t want to play with LEGOs or Matchbox cars.”

So Giovanni raced, and in doing so has been winning ever since he was in pre-school.

“Racing has been my life since I was 4 years old,” he said. “I haven’t known anything different.”

Currently a driver for Anthony Campi Racing in the Pro Late Model Series – think of it like the minor leagues of NASCAR – Giovanni hopes to be at NASCAR’s highest level by the age of 20. While most “cup drivers” are from Southern states, last year’s champion, Martin Truex Jr., is from New Jersey.