George H.W. Bush Passed away November 30th. The media, for the most part, has been proudly remembering an American Hero who served his country in many different ways. Even the Den of Vipers, aka The View, honored his memory in the only way they could. But plenty of people on the Left failed to appreciate his contribution to our country. Instead of honoring this American hero they took this opportunity to attack his memory.

“The myth-making about H.W. Bush was already out of control. We can’t afford to have these lies fixed into people’s heads. We must understand our history to shape our future.

One more: Roger Ailes was a campaign strategist for H.W. Bush and helped convince him that blatant racism and toxic masculinity theatrics would appeal to GOP voters.” 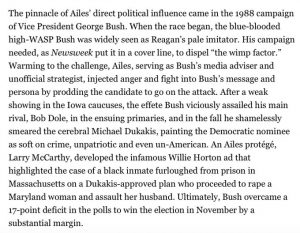 So Bush’s campaign put out attack ads as all politicians do. Where is the surprise here?

“I can’t with these headlines about Bush’s “masterful foreign policy”. He was a warmonger whose violence created unliveable conditions in Iraq hurting civilians, like my family who didn’t have access to life-saving drugs or basic food. Fuck him. And fuck media’s historical erasure.”

Many of these Bush haters cited the attack ad that included Willie Horton, they called it racist. But they are reaching no one forced Horton to murder. The ad made a valid point about weekend passes. They shouldn’t be given to murderers.

You can watch the “racist” ad below.

The ad was not created by the Bush Campaign but makes a valid point. If anything this ad makes me appreciate that he won even more.

But these haters will try to make anything racist or evil to demonize an American Hero.