Mad Maxine Waters is all about Impeachment and badmouthing the president, every time a camera is near. It would not surprise me if instead of the typical “cheese” when her photo was taken she said “impeach Trump.” That is the level of her distaste for the president. But we were all in for a sweet Halloween gift as Street Artist Sabo altered a billboard to reflect the hateful demeanor of the congresswoman.

Check out the billboard below. 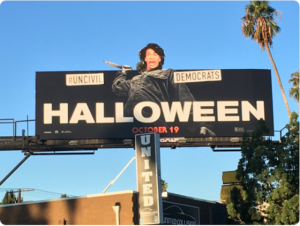 He did so in reply to Waters push for Democrats to harass conservatives.

“History will record while he tried to step on all of us, we kicked him in his rear and stepped on him. If you think we’re rallying now, you ain’t seen nothing yet. Already, you have members of your cabinet that are being booed out of restaurants, who have protesters taking up at their house, who say, “No peace, no sleep. No peace, no sleep.” And guess what? We’re going to win this battle because while you try and quote the Bible, Jeff Sessions and others, you really don’t know the Bible.

God is on OUR side! On the side of the children. On the side of what’s right. On the side of what’s honorable. And so, let’s stay the course. Let’s make sure we show up wherever we have to show up and if you see anybody from that Cabinet in a restaurant, in a department store, at a gasoline station, you get out and you create a crowd and you push back on them, and you tell them they’re not welcome anymore, anywhere. Mr. President, we will see you ever day, every hour of the day, everywhere that we are to let you know you cannot get away with this!”

See now that is a Halloween treat.