MSM Gets Caught Trying To Demonize The President

The MSM is so deadset against Trump they will go against their own liberal narratives to bash him.

CNN the other day criticized Trump for being in favor of more thorough background checks for guns… The MSM once again jumped the gun and went after Trump this time calling him insensitive for consoling a family that has experienced a great loss due to the EL Paso shooting.

The controversy surrounds a photo where Trump is smiling while holding a baby that lost his parents in the El Paso shooting. The baby’s family were big Trump supporters and the Uncle, who is seen in the photo, is also a big Trump supporter. This was not a publicity stunt as the president was there to give his condolences to the survivors and their family members. 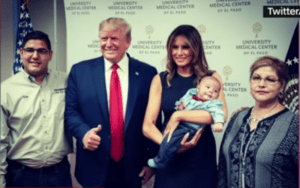 The uncle, Tito Anchondo, actually came to Trump’s defense after he saw the MSM bashing the president for this photo.

“People need to know what our feelings are as a family. My brother was very supportive of Trump,” he told NPR. “We’ve always been Republican conservatives in our family. Yes, maybe President Trump has said one or two things that we may not agree with. But in the big scope of everything, I don’t think he’s been a bad president, in my opinion.”

On Wednesday, Tito appeared in a photo next to President Trump and first lady Melania Trump, along with Paul and another Anchondo family member. While the image has received criticism over accusations of opportunism on the part of the president, Tito maintains it was his own decision to be there.

“He was just there as a human being, consoling us and giving us condolences,” Anchondo said of Trump.

This is a good thing when the president meets with the families and survivors of tragedies. It shows he cares. But the MSM is looking for any reason to burn him, and because of this, they are proving Trump right as they spread their hateful fake news.