Oreos have been around since 1912. Since that time they have made all sorts of variations of Oreos.

Some were successful like their double stuffed or thin, and others had a much shorter shelf life. This latest version is not even making it to the shelves. Oreo made a limited edition cookie for the World Pride 2019 Event in New York City.

This cookie was of course only meant for this event, so they made a Pronoun Pack to appease the gender identity people.

“We’re excited to announce we’ll be at World Pride 2019 in New York City tomorrow, June 30th! Celebrate with us at PrideFest, or go to our Instagram tomorrow to learn more about what we’re doing and follow along with us.”

“We’re proud to celebrate inclusivity for all gender identities and expressions. In partnership with NCTE, we’re giving away special edition Pronoun Packs and encouraging everybody to share their pronouns with #Pride today and every day.

The only real change is that the design on the chocolate cookie read: “Ask me my pronouns.” 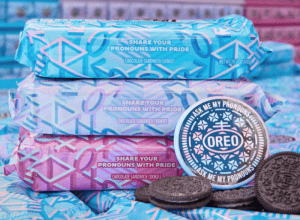 “NCTE is the National Council of Teachers of English. While it sounds benign, this massive organization that affects millions of teachers all over the country—and helped write Common Core—has been politically far leftist for decades. For example, the organization came out against allowing trained teachers to defend themselves from active shooters using licensed guns.

Its influence on actual English curriculum has been to degrade instruction with politicization and gobbledygook, according to the most rigorous research. Yet still they keep being treated as credible, just like all the other corrupt education institutions in this country.

Thus NCTE is in fact largely a political organization, not a professional organization, at this point. Assisting with these “pronoun packs” only makes publicly obvious what has been true about NCTE for decades. This is not just limited to NCTE, but is true of most of the major organizations involved in K-12 and higher education that exist under the cover of professional associations.”

Many people online expressed their outrage, some claiming that they had eaten their last Oreo. This is just a company trying to squeeze a few bucks out of the confused. They just don’t realize that in doing so they are legitimizing this gender trend.