In some High Schools, there are older kids that for whatever reason were unable to receive their diplomas in a timely fashion. So they end up redoing a grade.  But there is a cutoff. A student must complete the required courses for a diploma by 21  In the U.K. they are so concerned about being PC that they somehow allowed a man well above 21 to enter a High School. They foolishly believed him when he said he was 15.

“A couple of weeks after the start of this term, pupils at Stoke High School in Ipswich were told that a new boy was joining their GCSE class.

His name was Siavash, and he had quite a life story: Born in Iran, the teenager had been forced to flee the Middle Eastern theocracy in mysterious circumstances, and had since managed to cross Europe, with only a younger brother for company.

Having arrived in the UK – it’s not clear how – the duo promptly claimed asylum, declaring themselves to be 15 and 12 years old respectively. “

“There was, however, a problem.

Namely: Large numbers of the 668 girls and boys at Stoke High, an under-performing academy in a gritty neighborhood of Ipswich just south of the city centre, came rapidly to the conclusion that the supposed new boy was not actually a boy at all, but very much a fully-grown man.

At 6ft 1in, he stood head and shoulders over many classmates, while his chin was flecked with stubble.

He also boasted a protruding Adam’s apple and a hairline that, from a certain angle, was starting to recede. In the cold light of day, many suspected he was nearer 30 than 20.” 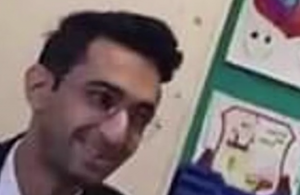 Students complained to teachers and to their parents.

“Serious questions were also raised about the school’s handling of the case, amid claims that complaints about Siavash had been blithely dismissed by staff, who in some cases had claimed the objections were motivated by racism.

‘I went in [to] complain but I was fobbed off. They are deluded and seem more worried about how the bloke might feel,’ said a father of two girls from Stoke High. ‘I am not aware of this lad having done anything inappropriate, but it’s clearly wrong that he should be in a class with children.’

One student claims that Siavash had told him he was a father of two and had a wife in his home country. He was only attending the school because the UK did not recognize his education.

The charade went on for a couple months until the school overwhelmed with parental and student concerns passed the news onto The Home Office. Siavash was pulled from the school pending a full investigation. The Home Office has still not responded about his actual age. But there are reports that he is now being treated as an adult refugee.

If he had been 15 as a refugee who has been granted asylum, he would have been given a full education for free.