The Freedom From Religion Foundation, an Atheist group, has been going after schools that say prayers on school grounds. They have been honing in on sports teams and how many coaches still hold a prayer before games. This time they were after Tennesse’s Rockvale High School. But this time the school is not stopping as they have found the workaround.

“Tennessee students at Rockvale High School called an audible to save a longstanding team prayer tradition after an atheist group tried to shut it down.

The Freedom From Religion Foundation filed a complaint with Rutherford County Board of Education on Aug. 30 against Coach Rick Rice, who admitted to the school principal that he had led two prayers since starting his coaching job this fall, FOX 17 reports.

“We always prayed before games. It was just part of what we did,” Rockvale resident Drew Kilgour told News 4, but the Wisconsin-based organization says it’s unconstitutional and demanded an investigation into the incident.

“Courts have consistently ruled that public school teachers and coaches may not lead, or participate in prayer with their students,” Patrick Elliott, FFRF senior counsel, said in a statement. “School personnel should take care to ensure that students of all faiths and no faith feel welcome on all school sports teams.”

The Coach sadly had to cave and stop doing a prayer before each game. But the school rallied behind the coach and now has students doing a prayer circle before games, which is still allowed. 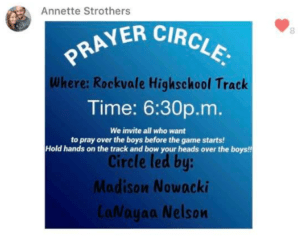 “Rice is the first coach for the new school, which just opened this year. Before his move to Rockvale, Rice coached in Wayne County for 21 years. According to Wayne County News, Rice had a 203-123 record in Wayne County and made it to the playoffs for 18 straight years.”

Good for the students. They should have the right to pray if they want to. The coach was not meaning any harm in praying for the team’s welfare and even apologized. It seems like this atheist group is just looking for a fight as no one in this school seems been bothered by a prayer.