Gov Northam looks like he may not be in office much longer. In light of a racist photo that surfaced.

The Virginia Governor had recently been advocating for abortion all the way up to birth. But it looks like it’s not just babies that the Gov has a problem with. 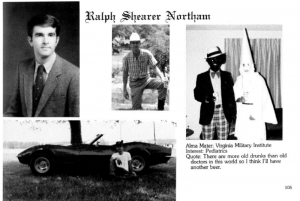 The photo leaked comes from his medical school yearbook. Its a photo that he selected for the yearbook, there are two young men. One in blackface the other dressed as a member of the KKK. He has yet to confess about who is who in the photo, but admits he is dressed as one of them.

Northam commented on the release of the photo.

“Earlier today, a website published a photograph of me from my 1984 medical school yearbook in a costume that is clearly racist and offensive,” Northam’s statement read.

“I am deeply sorry for the decision I made to appear as I did in this photo and for the hurt that decision caused then and now,” the Gov added.

“This behavior is not in keeping with who I am today and the values I have fought for throughout my career in the military, in medicine, and in public service,” Northam continued. “But I want to be clear, I understand how this decision shakes Virginians’ faith in that commitment.”

“I recognize that it will take time and serious effort to heal this damage this conduct has caused. I am ready to do important work. The first step is to offer my sincerest apology and to state my absolute commitment to living up the expectations Virginians set for me when they elected me to their Governor.”

Democrats and Republicans alike are calling for his resignation.

Serves him right for advocating for late-term abortion. I hope this kills the pro-abortion bill.