A study shows that about 51 percent of immigrant households receive one form of welfare or another but when you break down the numbers by demographics the results are staggering.

Dems defend the issue by saying that the majority of those numbers are only reflecting first generation immigrants but who is paying for this all? Taxpayers. So, the question should be; why do we keep letting people in who contribute less than they receive?

A study conducted by the Center for Immigration Studies (CIS) found that the majority of the more than 1.5 million foreign nationals entering the country every year use about 57 percent more food stamps than the average native-born American household.

The study conducted by CIS can be viewed here, in its entirety. If you get a chance you should read over the full report but here are a few highlights of what you need to know:

The average welfare cost in immigrant-headed households is $6,234, compared to $4,431 in native-headed households. Immigrant households consume more cash, food, and Medicaid dollars than native households, while housing costs are roughly the same for both groups. Figure 1 shows that Medicaid is the largest welfare program, driving a large part of the overall difference between immigrants and natives 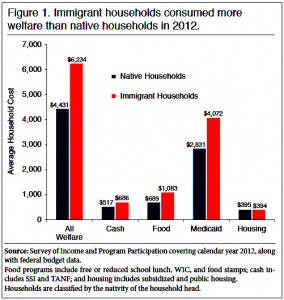 The cost of immigrant welfare use varies by the immigrants’ region of origin. [The study] shows that the highest-cost households are those headed by immigrants from Central America and Mexico, consuming an average of $8,251 in welfare spending. Households headed by immigrants from Europe and Asia tend to be the least costly. Unfortunately, individual countries are not identified in the SIPP, so a finer-grained analysis is not
possible.

Although the SIPP does not directly measure legal status, probability models can be used to determine which immigrants are most likely to be in the country illegally. Table 3 indicates that households headed by (likely) illegal immigrants have an average welfare cost of $5,692. Illegal immigrants are barred from directly accessing most (though not all) welfare programs, but they can receive welfare through their U.S.-born children. Legal immigrant households, which have greater eligibility for welfare, cost $6,378 on average.