FEMEN, the feminist activist group is taking responsibility for the public indecency that fell upon Trump’s Motorcade. They claim at least two of the protesters were part of their organization. Trump was in a motorcade on the way to a ceremony to commemorate the end of World War I.

One topless woman made it all the way into the path of the motorcade practically stopping it. She was waving her hands in the air and yelling the same thing that was painted on her bare chest: Fake Peace!

Authorities quickly put an end to her naked protest and apprehended her before she caused the motorcade to fully stop.

She was not alone as another protester tried to follow her out to the motorcade. She was stopped before she made it very far from the street barrier. The protester also had a painted chest that read “Fake peace.” 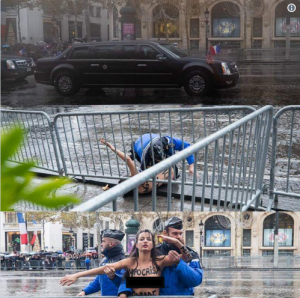 You can watch the raw footage here and here.

“Inna Shevchenko, leader of the Femen group, tweeted a video of the incident and said the presence of Trump and other world leaders, including Russian President Vladimir Putin and Turkish President Recep Tayyip Erdogan, had transformed the Armistice Day event “into a sad spectacle which is entertaining only for the criminals participating in it.”

“FEMEN believes that restoring world peace with those who are responsible for the ongoing wars is hypocritical,” the group wrote on its website after the woman was arrested. “How could they work for peace? Does Trump work for peace when he flouts international treaties? No !”

“Dozens of world leaders, including Trump, French President Emmanuel Macron, Russian President Vladimir Putin and Turkish leader Recep Tayyip Erdogan, gathered on Sunday at the Tomb of the Unknown Soldier under the Arc de Triomphe to commemorate the centenary of the ending of the First World War, which began in the summer of 1914.”