Trump Makes A Razor Edged Improvement To The Border Walls

Trump is doing everything he can to ensure Americans safety. The original plan for his wall has undergone a much-needed upgrade. Democrats had been naysaying claiming that the wall would not be effective. They joked about ladders and ropes. But it looks like Trump has shown them what a deterrent looks like.

In a recent tweet he showed us what these illegals are up against.

“The Fake News is showing old footage of people climbing over our Ocean Area Fence. This is what it really looks like – no climbers anymore under our Administration!” 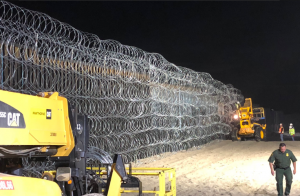 Ouch! That looks like it would slice and dice anyone that tried to jump over.

The army has been deployed to put concertina wire along our border as an additional deterrent. The razor wire may have already started working.

“According to a report from the Center for Immigration Studies’ Todd Bensman.

He reported today: “Intelligence friends told me the Mexican cartel across the river, CDG, was angered by the U.S. troop deployment because it slowed the pace of drug smuggling and that the blamed the caravan for this. The cartel, I was told, has threatened the migrants to pay steep fees to cross through their territory or go elsewhere, hence the initial moves to Tijuana. No telling whether this is true. I just heard it from sources with access to such information.”

So even the cartels are upset about the caravan. This is not Trump’s only move to try and deter illegals. He recently made a proclamation that would make those that cross the border illegally ineligible for asylum. But an Obama appointed Judge has muddled up that effort.

These upgrades are necessary. We need ways to deter illegals from entering. Especially when it seems like Dems are doing everything they can to stop Trump’s efforts to keep us safe.