Watch: Activist Caught Stealing the Crosses off of a Pro-Life Display

Students at the University of Michigan decided to put up a nice display to show their Pro-Life support. The display was not obscene or even inciting. But that didn’t stop Abortion activists from trying to mess it up all day. Whether it be by steal parts of it or attempting to throw bits of it away. 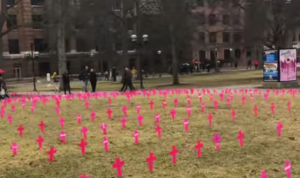 “Students for Life set up the 1,000 crosses around 9 AM, with permission from the school, on the Diag on campus and throughout the day pro-abortion activists, presumably students although that is unclear, kept pulling crosses out of the ground, placing them in trash bags, or putting them on top of trash cans. Around 12:50 PM, Kaylena Wiederhold, Students for Life’s Michigan Regional Coordinator, confronted several of the students and questioned them on why they were stealing Students for Life property.”

“Is there a reason why you’re doing this?” Kaylena Wiederhold, Students for Life’s Michigan regional coordinator, asked the purple-haired activist who was putting the crosses in a white trash bag.

“We disagree with it,” the activist replied.

“Okay, but this isn’t your property,” Wiederhold warned the activist.

“We know that having a conversation isn’t going to work,” the activist claimed as if that were reason enough to ruin the display.

“Can you please put it down? Will you please give me it back?” Wiederhold asked.

Police Officers showed up and the activist quickly changed her tune.

“We were just cleaning up this garbage on the school campus,” the purple-haired activist lied, “but we’ve realized that apparently this is someone’s property. And you’re telling us to leave it, I’m assuming?”

“Correct,” The officer informed her. “And they do have a permit like she explained to you.”

Watch The Confrontation Below.

The purple haired activist doesn’t even have the class to put the crosses back she just dumps them on the ground claiming she doesn’t know where they went. People can disagree all they want but there was no reason for her to actively take down this display. Typical liberal tolerance for you.