How warped is it that the same people who would call for your help, ruin children’s views of your profession for years to come? That’s exactly what happened to detective Webber and his fellow officers when they were invited to help a Michigan high school. The team was asked to come in and check for drugs and was met with a hallway full of police brutality posted made by the students, likely under the direction of their social studies teacher.

According to Blue Lives Matter, law enforcement officers conducting a “drug sweep” at the request of a Michigan high school were surprised to find handmade “police brutality” posters plastered to the wall outside a social studies classroom.

Detective Christopher Weber posted photos of the posters on social media on Tuesday night, and blasted the school district for “perpetuating the narrative, lies and victimhood” regarding supposed excessive force by law enforcement.

“The school administration there requested several K9 teams to do a drug sweep, which is common practice for many schools in Genesee County,” Det. Weber told Blue Lives Matter on Friday. “I learned from some of the K9 teams about the posters… and [I] asked to post their pictures in the interest of sharing what, in my opinion, is subject matter inappropriate for a high school.”

Galsterer explained that students created the posters as their final assignment for the class.

While some students chose to focus on “police brutality,” others featured topics including “Terry Frisk, compare and contrast of Miranda rights, [and] specific court cases related to the amendments,” she said. 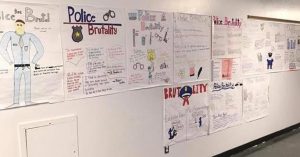 As Written By Bearing Arms:

School officials think the police should have brought their concerns to them so they could be informed as to the nature of the display.

However, Galsterer can claim that only some of the students focused on “police brutality” all she wants, but let’s face facts for a moment.