Retired Veteran Fired For Voicing His Science Based Opinion On LGBTQ

Gulf War Veteran Gets The Axe For Opinion On LGBTQ

It’s an odd world we live in where people can be fired for simply stating some scientific facts. Gulf War Veteran Will Caligan became a comic book artist after his service and was on contract with Short Fuse Media Group to make comics. Everything was going well until Caligan decided to voice an opinion about a TV show. The TV show had was a U.K. episode of Big Brother where an R&B musician Ginuwine rejected the advances of a transgender female.

Watch his reaction below.

Liberals and the LGBTQ were up in arms over Ginuwine’s reaction. Caligan expressed his opinion on Facebook and the PC police showed up to call him out for being transphobic. They then proceeded to terrorize him and his business by trying to get him blacklisted from the comic industry. 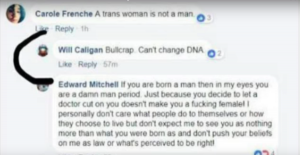 Picture of clips is a little blurry but reads:

Carole Frenche: “A transwoman is not a man.”

Carole Frenche: “Gender is a social construct conflated with sex gets further muddled when the complexities of biology are explored.”

Will Caligan: No, it isn’t. It is a nature construct. You can think what you like but that doesn’t change the truth.

These posts made the LGBTQ community go mad and they started blew up facebook and social media with their hatred of Caligan’s opinion. 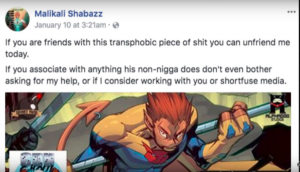 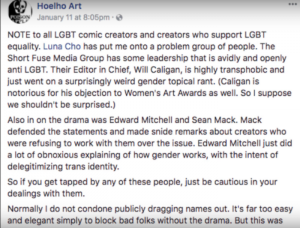 Caligan concerned contacted his boss at Short Fuse Media Group and explained the situation. The boss was supposedly understanding until the liberal tirade got out of hand and the company decided it was best for them to part ways. 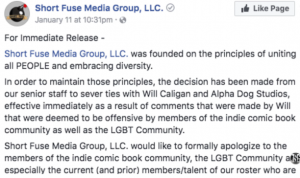 Watch a video about the incident here.

Thanks to PJmedia.com and other similar news outlets, reports of his firing over his opinion spread. A crowdfunding page was started to help him continue his work. He was looking to raise $7,500 but has raised $32,941 at the time of posting this. He also found new a contract with Vox Day of Castalia House Publishing.

Liberals who were against him also made a gofund me and anti-bullying fund in response to his.

Thanks to conservatives and people that allow others to have their own opinions Caligan will be OK despite the LGBTQ and Liberals best efforts to destroy his life over a Facebook post.