Spanish Father Puts A Stop To Pedophile’s Advances On His Daughter.

Sexual Predators are a thorn in society’s side. The whole #Metoo movement with Weinstein and the slew of Hollywood Sexual deviants has shined a light onto these offenders. But not all offenders are in the limelight. Argentinian Father Walter Rodriguez learned that his 11-year-old daughter was being sexually harassed online, not by a friend or schoolmate but a 29-year-old man.

Upon learning this Walter took over the daughter’s phone and looked to bring this sad excuse for a man to justice. The man later identified as Germán Acosta sent numerous texts to the daughter’s phone asking all sorts of provocative things. He wanted pictures of the little girl in her underwear and wanted her to lie to the parents in order to meet him. He told her to say that she was at a friend’s house. This only fueled Walter’s ambition to get Acosta.

“Tell them you are going to see a friend,” Acosta wrote to the girl, not knowing her dad was reading the messages. He also sent sexually explicit messages and asked her to send photos of herself in her underwear. “I’m a virgin,” she told him. “That’s great,” he replied.

Walter then set up the meet. Originally the pedophile suggested the home of the little girl but thought better of it.

Upon meeting, Walter beat the crap out of Acosta and then took his photos to post on social media. To warn others of this pedophiles behavior.

The article above shows the beaten up pedophile Acosta. 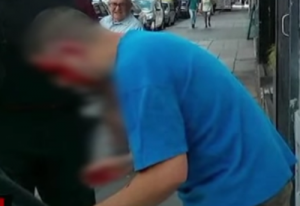 The father then went to report all of this to the police thinking that something would be done especially with all of the evidence he had.

“I made my statement before a judge. I told them everything, how it happened, I showed them the screenshots, what he had been sending to my little girl,” Rodríguez said. “I don’t understand why they let him go. A person like this doesn’t deserve to be free.”

The courts failed to do their job allowing Acosta to walk freely even if it is only until he is properly tried. He is a danger to children throughout Argentina. Acosta faces an online harassment charge and grooming, “the crime of befriending a child to lure them to perform sexual acts.” Walter faces a battery charge.

Acosta is lucky that Walter stopped at a beating as some might not have had the control to stop. The courts, in this case, could potentially end up sentencing Acosta anywhere from 6 months to 4 years.