Liberal professors are everywhere constantly trying to make negatives out of positives. It seems almost daily that there is some new spin on something wholesome all in the name of publicity. This disgusting new trend has found a new target the home of Mickey Mouse, Disney. 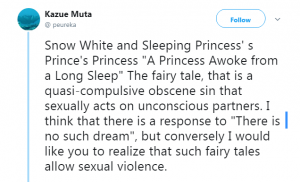 the tweet is a little rough as it is google translated.The tweet translated by Japan Today reads “When you think rationally about ‘Snow White’ and ‘Sleeping Beauty,’ that tell of a ‘princess being woken up by the kiss of a prince,’ they are describing sexual assault on an unconscious person. You might think I’m ruining the fantasy of it all, but these stories are promoting sexual violence and I would like everyone to be aware of it.”

Professor Kazue Muta of Osaka University, Japan, is making the outlandish claim that Sleeping Beauty and Snow White are both somehow victims of sexual assault. The Professor claims that the movies suggest it is OK to engage in sexual assault with an unconscious woman.

Before I go any further she supposedly has seen the movies and knows that both of the women in these movies were cursed to sleep forever. So she is saying that the men in these movies who brought these woman back to life with a kiss are somehow perpetuating a rape/sexual misconduct culture.

Her view has, of course, received a multitude of criticism as it’s ridiculous.

“This kind of dismantling of our culture and traditions does more harm than good.”

“In these cases, it’s more like artificial respiration than sexual assault.”

“No matter how you interpret those stories, what the princes did is not sexual assault!”

Professor Kazue Muta claims that she tweeted this partially in response to an incident where a man kissed a woman that was asleep and tried to link it back to fairy tales but this just doesn’t jibe. There is no problem with bringing awareness to sexual misconduct but to the link to Snow White and Sleeping Beauty is just slandering these Disney Classic movies for the sake of publicity.

Watch: Cops Take On Buttigieg Head On: “Drop The Politics”

Transwoman Sues After Woman Refuses To Wax His Family Jewels

Watch: Child Slapped With Charges After Playing A Game Of Dodge Ball