You could hear the disgust in Trump’s voice during his interview with Fox News host Judge Jeanine Pirro. The Biden administration’s first clear initiative once entering office was the undoing of Trump’s strict border security policies. Biden and his team clearly did not think past dismantling Trump’s efforts because between offering open borders, clear and free paths to citizenship, and destroying Trump’s international agreements with our neighbor countries the Biden administration caused a severe crisis at the border.

“A lot of people want me to” visit the border, Trump told Pirro.

In the interview, Trump said he would probably visit the southern border over the next few weeks. Trump called President Biden’s undoing of the “Remain in Mexico” policy, or the Migrant Protection Protocol, a “very bad decision.”

The Trump administration set up and expanded MPP during the 2019 migrant crisis as part of a broader agreement with Mexico, and hailed it as a key plank in its efforts to end “catch-and-release” — by which migrants were released into the interior of the U.S.

Instead, MPP keeps migrants in Mexico as they await their asylum hearings. Proponents say the policy ended a key pull factor that brought migrants north, while critics say it is cruel and puts migrants in danger by leaving them in Mexico.

“Thousands and thousands of people are coming up right now as we speak. And you’re going to have millions of people pouring into our country. And it’s going to destroy our country,” Trump told Pirro.

Trump said the first thing Biden should do is reenact the “Remain in Mexico” policy and complete the border wall.

He said Mexico is now “very angry at us.” “We’re not getting along with Mexico any longer. You have a great president of Mexico who was fantastic to me,” Trump said.

Mexican President Andrés Manuel López Obrador even mocked Biden, blaming him for the unnessisary disaster. In return, Biden cried that Mexico has refused to take some of the families back and vowed to return them regardless.

It’s not clear at this time what access, if any, to the border facilities Trump will be granted. Reporters were banned from entering most of the facilities. We only recently got a clear look at the dangerous overcrowding thanks to Texas Senator Ted Cruz who recorded what he saw at one of the locations. Cruz has a Biden staffer in his face trying to block his camera’s view but it was clear the conditions were not ‘pandemic safe’. 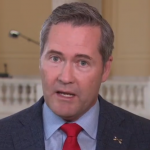